Here the inverter (L3) shows 0 vars (theoretically "in phase") yet the load (L2) shows 42 var and the Net meter (L1) shows 40, allowing for a small anomoly of 2 vars and the fact that all the PF are showing 1.00 or Unity you cant tell if the Load (L2) vars are inductive or capacitive, but most likel... 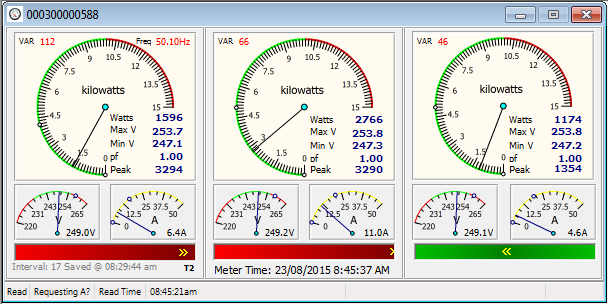 Here are some examples that I captured from a V 4 meter: Single Phase 240Vac 50Hz Co-Generation System using a Solid State Transformerless Inverter: L1 - The meter on the left hand side is Net metering the Import & Export of the Co-Generation System Green = Exporting, Red = Importing, Black = Invert...

CIVIL: in a capacitive load (C) the current (amps or i) leads voltage (V), voltage (V) leads current (i) in an inductive load (L). Mnemonics can be a PIA at times but in a sense yours and mine are identical and not at all opposite: Current Leads Voltage in a Capacitive Load. Where the confusion set...

I have noticed that the phase indicator perfix for PF (COS) appears to get removed once PF (COS) field hits 1.00 Correct the current is neither leading nor lagging the voltage and the PF is considered to be "In Phase" and at UNITY when 1.00 appears. I should add, that frequency will also have a bea...

I played around with this "excel" solution a while back with a V3 meter and it worked, so I think you will find that it was originally developed for the V3 meter but never updated for the V4 which is why you will most likely be getting the unpopulated fields, etc........ The V4 has more fields than ...

I think your right in your assumption that its only the last 1000 entries at 1 minute sampling that is available (unless you have organised a different sample rate with EKM) I don't know if this could be of help to you: http://documents.ekmmetering.com/Importing_.xml_Directly_to_a_PC_Excel.pdf You c...

Sorry I don't have any additional user manuals different to yours, I have no affiliation with EKM ! If for some reason you didn't receive the original instruction sheet then you could download it here: http://documents.ekmmetering.com/OmniMeter_Universal_Smart_Meter_User_Manual_EKM_Metering.pdf Furt...

The blinking light is basically an indicator that alerts you that you are either importing or exporting energy. It could also be used to automate the process of counting the LED flashes, and/or if you have experience with using micro-controllers such as PICAXE, Arduino, Raspberry Pi, etc..... and wa...

Hi Jameson, Yes the "Season" was set as per your screenshot, the weekend rates were set, all the TOU settings were displaying correctly as they were set (TOU, Seasons, Holidays & Schedules) but the energy was accumulating to the T2 register at a time when it should have been accumulating to the T1 r...
Search found 56 matches